Highs of Summer at Diss Auction Rooms
An armchair visit to the website www.twgaze.co.uk will affirm that the auction world can be your oyster at Diss Auction Rooms. The calendar of sales offers choice, variety, tempting lots and accessibility, with up to three auction days every week in a combination of online-only and onsite sales, which is wonderful news for buyers. The sales themselves are proving there is currently a huge appetite for auctions; markets are frenetically active and very buoyant, which is perfect news for sellers.
Director Elizabeth Talbot says “Despite everything, this is proving a very busy summer for auctions and I’m pleased to say we are catering for staycations, luxury vacations, and voyages of the imagination…”
TW Gaze hold four distinctive weekly auctions on Fridays, a compelling mix of antiques, furniture, outdoor effects, and nursery stock. These auctions can be viewed and attended in person, with refreshments obtainable from Café 1857 on site. In addition, there are two or three specialist auctions held earlier in the week which are viewable by appointment and sold online. The special sales held during August have yielded these notable highlights.
From the Land of the Rising Sun came eleven 18th-19th Century Japanese Kozuka knife handles. They were all individually decorated with Japanese figures, animals, mountains and fish, and four of them were signed to the back. The Japanese are renowned for their prowess in capturing Nature through their artistry, no matter what the media. The detailing here was exquisite, and the hammer price of £1,700 proved very attractive, too.
From East Anglia’s Sunrise Coast came a private collection of Lowestoft porcelain, dating from the same late 18th – early 19th Century period. Whilst prices for Lowestoft porcelain have dipped a little in the last two or three years, interest was still strong, as illustrated by this blue and white baluster shaped sparrow beak cream jug painted with sprays of flowers, which stood just 11.5cm tall and was from the Spelman & Colman Collection. It caught the eye at £240.

A Victorian mahogany framed Sailor’s Valentine with two shell arrangements of a heart and flower contained in a hinged and glazed octagonal wooden case, 21.5cm wide, found a new home for £1,700.00. It was typical of the popular shell craft made into sentimental gifts, originally popular between 1830 and 1890, designed to be brought home from a sailor’s voyage at sea. Although the name seems to suggest that the sailors themselves made these objects, a large number of them originated on the island of Barbados, which was an important seaport during this period. Historians believe that the women in Barbados made the valentines and then sold the finished products to sailors.
Travel luggage was well represented with a fine early 20th Century vintage Louis Vuitton wardrobe trunk, no. 796731. Louis Vuitton (1821 – 1892) was a French entrepreneur and designer whose name has become iconic in the fashion world. His was a fascinating story, but suffice to say here, when Eugenie de Montijo, a Spanish countess and wife of Napoleon III, hired Vuitton as her personal box-maker and packer she ensured for him the life-long patronage of elite and royal clientele. It was he, too, who developed lighter, more durable and impervious luggage and was responsible for introducing the rectangular trunk in place of the traditional dome-shaped chest which preceded it. This meant his trunks were stackable and therefore far more convenient for shipping via the then new means of transport including railroad and steamship. Vuitton’s trunk is acknowledged as representing the birth of modern luggage; meanwhile under the management of his son Georges, who designed the famous LV monogram, the Louis Vuitton brand would grow into the world-renowned luxury brand we recognise today. 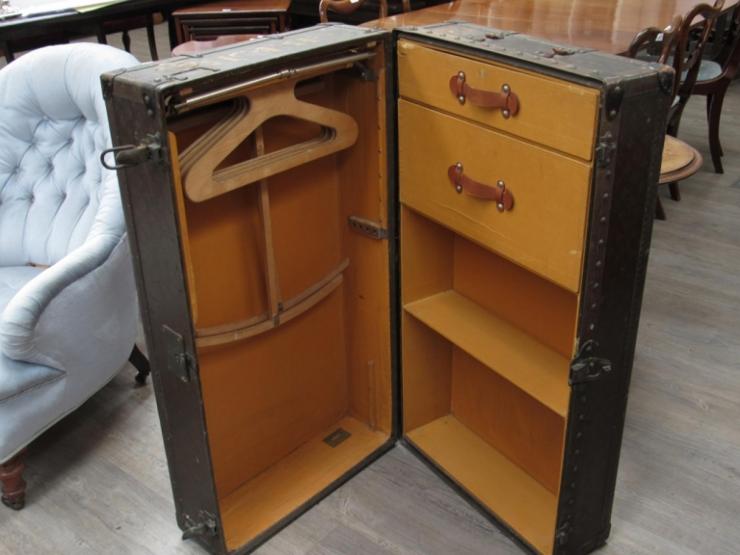 TW Gaze has successfully sold several examples of Louis Vuitton products in the last 18 months, from late Edwardian pieces to modern editions and they seem to be making quite a name for themselves in this area. This trunk was stowed away for a handsome £4,200.00.
No holiday would be complete without relaxation and recreation. TW Gaze had these aspects covered too. Games and pass-times included a 19th Century Calvert wooden chess set with turned and carved pieces; the white castles stamped ''Calvert 189 Fleet Street'' to their bases. John Calvert was one of the top chess set makers in England from 1791 until his death in 1822, after which his widow Dorothy took over the Calvert business until her death in 1840.

Despite a couple of repairs, the set, together with a wooden chess and backgammon board, was fiercely competed for and finally checked out for £2,500.

'My Early Life, A Roving Commission' by Winston Churchill, a Keystone Library reprint, 1940, signed and inscribed on front endpaper ''To David Julian Benn from Winston S. Churchill, July 1940''. The recipient, David Wedgwood Benn (1928-2017), was a writer and BBC producer whose passion and expertise in Soviet affairs led to a distinguished career in the World Service. This provenance helped achieve a hammer price of £3,800.00.

Star of the show  went to Jane Austen: a first edition of 'Northanger Abbey and Persuasion” in four volumes, published by John Murray, London, in 1818 which sold for the princely sum of £9,500.00. Gaze’s inhouse Book specialist, Robert Henshilwood, believes this may represent an auction record.
Further information can be obtained from e.talbot@twgaze.co.uk or r.henshilwood@twgaze.co.uk