Auctions were traditionally public events, and for 200 years from the early 18th Century they were utilised as rudimental vehicles of business transaction, including by importers and merchants for goods, slave traders for people and High Society for fine art and rare artefacts;  but by the mid-20th Century they were increasingly the domain of specialist dealers and “the trade”, who would buy from auction sales to stock their shops, from which private clients would buy art, antiques and curios.

As such, a generation or two grew up with a wary nervousness about how to attend an auction and broach the matter of bidding. The widely-held belief that it is possible to accidentally bid and unintentionally buy a lot at auction is one I have spent my career trying to dispel, reassuring people instead that a bidder’s intent (however subtly displayed) is recognised by the auctioneer and if in doubt, an auctioneer would query whether a particular gesture was meant to be taken as a bid. An auctioneer is (very nearly) all-seeing from his or her vantage point on the rostrum and can usually understand the context of a movement or gesture. The initial intent to bid is accompanied by meaningful, if barely detectable, eye contact. If you are merely sitting scratching your nose, it will have no impact on the auctioneer; if you are also intently staring into his or her eyes, the implication will be different. 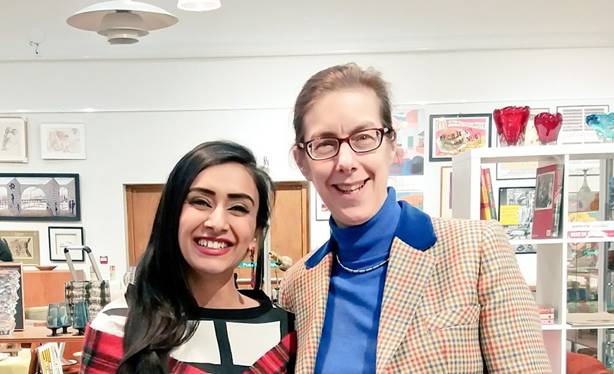 The exciting result of there being so many auction-based programmes broadcast for us all to see, is that the auction environment has been made accessible again and reclaimed as a legitimate public space. The level of exposure given to auctions over the airwaves, especially in the last 20 years, means we have had opportunity to become regular and adept auction-attendees from the comfort of our own armchairs; a familiarisation with auction engagement is shared by much of the population and with it, a more relaxed and easy-going expertise. The viewing of televised auctions has increased during this exceptional period of social lockdown, because day-time television is proving the dependable companion to so many of us. There lies the irony! Just when we have established there is no need to fear setting foot in an auction-room, a life-changing worldwide crisis prevents us from attending physical auctions, for the short term at least.

Less than a month before the lockdown in Britain, TW Gaze welcomed another return visit by the BBC and their “Bargain Hunt” crew. Hosted by Charlie Ross, with team experts Roo Irvine and Tim Weeks, it was deemed a successful day at the auction for the red and the blue teams, with plenty of excitement for the forthcoming series. Now, of course, the thought of a crowded saleroom, with plenty of people and lots of hustle and bustle, seems a world away.

However, for all auction enthusiasts, whether long-standing or newly established, the world of technology is filling the breach. As the 20th Century ended, the world of international transactions which demanded increasingly speedy communications and convenient methods of engagement had already led to the evolution of traditional auction houses’ working practices. As the new Millennium dawned, one of Tony Blair’s government’s objectives was to ensure every British household had access to a computer and from then on auction houses and High Street favourites followed a similar mass-marketing agenda.

Auction platforms, taking many guises, are well precedented; most auctioneers have marketed their sales online for several years, in one way or another, usually offering this as an alternative method of engaging directly with the live action taking place at the auction room, either via video link or audio only. Again, you may be familiar with seeing this in action on television. Some companies place all their lots on outsourced auction platforms, others select certain specialisms to maximum desired effect.

A word to the uninitiated: using online platforms which provide a portal to a live auction will likely increase the amount of commission you pay in total and please do not overlook the need to add transport or postage charges to your calculations, because the costs involved in shipping valuable, unique and fragile items reflect the specialist nature of the undertaking and cannot be compared to other forms of online shopping p&p..

Timed auctions are another variation on the theme and in addition, some auction houses, such as Diss Auction Rooms, place every catalogued lot they process on their website, so it is possible to leave remote bids via their inhouse system. Now, in response to the current 21st Century pandemic, auction houses are reconfiguring still-further in order to integrate their relevance and efficiency of service with yet more methods of remote working. This includes how items can be consigned for sale and how purchases can be collected under safe conditions of social distancing.

Many auction houses across the country and around the world kept their auctions going through April; others are beginning to hold sales in May and June. Having taken stock of the situation during the first few weeks of lockdown, TW Gaze will re-instate online-only auctions at the end of May. These will begin with separate dedicated Automobilia, Militaria and Antiques auctions, sold to bidders on twgaze.co.uk and live, augmented with audio feed, on the-saleroom.com. Auctions for June and July are being prepared. It may be some time before we welcome salerooms full of people again, but there is potentially lots going on!

Catalogues and sales calendar, plus special conditions and instructions about Coronovirus managed-working will be updated at twgaze.co.uk. Should you wish to learn more about the auctions, arrange a valuation or consign pieces for sale, please email e.talbot@twgaze.co.uk.